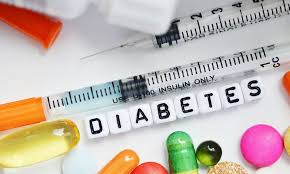 Since 2015, it has been estimated that 1.6 million deaths happen due to diabetes, and almost 2.2 million deaths take place due to high blood sugar levels. Diabetes is a chronic illness that happens when the body is unable to provide enough insulin for cells to function. The lack of insulin triggers excess sugar production in the blood. And this is known as glycosuria and hyperglycemia. This means that your body has way too much glucose, and it can obstruct the regular functions of your nervous system, heart, eyes, blood vessels, and kidneys.

Listed below are some common signs of diabetes:

Diabetes is one of the most problematic diseases in the world. While some cases of diabetes are hereditary, most are caused by the stresses and habits of modern life.

Ayurveda defines each person as a unique combination of Doshas. The three Doshas are Vata, Pitta, and Kapha. Vata is a dry and airy dosha, Pitta is fiery and Kapha is cold, slimy and heavy. The imbalance of each Dosha causes health issues that are linked to the imbalance. Diabetes is a Kapha Dosha imbalance problem. However, just being a Kapha dominant person does not signify diabetes. When the Kapha dominance is not counterbalanced with a balancing diet and lifestyle, it can manifest as diabetes. When the Kapha Dosha is imbalanced and it is compounded with a weak Agni, it slows the metabolism. This causes problems with excessive sugar levels in the body.  A person who is Kapha dominant should ensure that there are enough air and fire elements in their food and habits.

Ayurveda refers to diabetes as Madumeha which literally means ‘sweet urine’. It refers to the increased blood sugar level in the blood that causes excess sugar in the urine as well. Ayurvedic texts about Ayurvedic treatment for diabetes also describe ‘Dhatupaka Janya Vikruti’. This is the ill effect that high sugar levels have on other bodily tissues. The texts also describe a tendency to inherit the disease. Ayurveda defines Ojas as the very essence of life, When this is lost, the strength of all the bodily functions are lost. In diabetes, Ojas is lost through the urine and hence diabetes is sometimes called Ojomeha or the loss of Ojas through the urine.

The Two Types of Diabetes As Per Ayurveda

Ayurveda classifies diabetes into two types; Avarana and Dhatuksyaya. The first type is caused when the channels of the body are blocked by the aggravated Kapha Dosha or other tissues of the body. This is the usual cause of adult-onset diabetes. Ayurveda defines the bodily tissues as Dhatus. When these tissues are affected or depleted it causes the second type of diabetes. This is usually the cause of juvenile diabetes.

The digestive fire Agni should be kept at a strong level so that digestion is optimum. The largest or heaviest meals of the day should be around noon. A light breakfast and dinner are ideal. To avoid aggravating the cold Kapha Dosha, food should be eaten warm and cold food should be avoided. The Kapha dosha is aggravated by sweet and sour tastes. So, avoid food that has these tastes dominant. A Kapha dominant person should add warmth by sipping on warm or hot water throughout the day. Water that has been stored in copper is a traditional aid to diabetes treatment. Since the metabolism and digestion are slow, snacks in between will strain the digestion further. The intake of certain Ayurvedic herbs and formulations that aid the digestion and enhance the digestive fire is advised for insulin resistance treatment.

Hypoglycemia treatment according to Ayurveda goes beyond medication and diet. Stress is a big factor in aggravating diabetes. Making an effort to avoid stress or manage it properly goes a long way in helping the body balance its Doshas. Adequate sleep is also one of the lifestyle changes recommended for Ayurvedic treatment for diabetes.

Each stage of life has a dominant Dosha. The first stage of life, childhood is Kapha influenced. The second stage of life which starts at puberty is Pitta influenced. The third stage spans from the age of 50 to death. Childhood is the Kapha dominant period of life. When children have a Kapha aggravating diet or lifestyle at this stage it can manifest as Type 1 diabetes. Type 1 diabetes treatment in Ayurveda looks at rebalancing the Doshas through a combination of internal and external Ayurvedic treatment as well as lifestyle changes. It identifies the stress factors in the body and tries to relieve them. Type 2 diabetes is called Apathyanimittaja in the Ayurvedic texts. It is caused by an aggravated Vata Dosha that then makes an aggravated Kapha Dosha. It is compounded by a sedentary lifestyle and habits. Type 2 diabetes treatment includes Ayurvedic medicine to balance the Doshas and lifestyle changes to better manage it.

Sometimes allopathic remedies can be too much for a person to handle, and they may require a gentle and effective experience to notice the result they want. Often, patients tend to seek Ayurvedic herbs for diabetes because Ayurveda is known to be a holistic healing practice and prevent diseases from entering the body.  Many Ayurvedic herbal ingredients are commonly used in Indian cooking. Being aware of their health benefits, helps one use more of them in our daily diet. Knowing the benefits of each herb also gives a better understanding of how certain Ayurvedic formulations help in Ayurvedic treatment for diabetes. Some of the major ingredients that are used in Ayurveda, for diabetes, are as follows:

Amla or the Indian gooseberry is known to be the most potent Ayurveda herb, and it's rich in vitamin C and antioxidants; this makes it perfect for treating and keeping diabetes under control. Amla also has chromium, which is a mineral that enables proper carbohydrate metabolism. Chromium also allows your body to respond to insulin, which keeps the blood sugar under control as well. Other minerals that are present in this wonder fruit are calcium, phosphorus, and iron; they help with the body absorb insulin and regulate the blood sugar levels.

Amla is well known as one of the three fruits that compose Triphala. It is used in Ayurveda to eliminate toxins and nourish the tissues. It has the property of reducing excessive Pitta in the gastrointestinal tract. At the same time, it supports the Agni or digestive fire without aggravating the Pitta. This makes the digestive process and metabolism stronger without throwing the Doshas out of balance. It is defined as fruit that stimulates microcirculation as per Ayurveda. This increased microcirculation is ideal for building Ojas and counteracting the loss of Ojas through urine that Ayurveda defines as a symptom of Diabetes. When there is an increased Ojas it also nourishes all the tissues of the body creating greater vitality and overall good health. Amla is also credited as an Ayurvedic herb that supports the proper movement of the bowel content and cleanses the colon.

If you plan on taking amla supplements to regulate your diabetes, then ensure that you consult with an Ayurveda expert before you do, so that they can provide you with a proper dose that doesn't interfere with your current medical plan.

This ayurvedic mixture is a natural immunity booster, and it's great for digestion too. This powdered formula consists of Haritaki, Amla, and Bibhitaki. The trio of ingredients is known to prevent the early onset of nasty diseases and disorders. It also contains powerful antioxidants that maintain a healthy heart and stable respiratory functions as well. The use of this mixture has been mentioned in the Sushrut Samhita. It is used as an Ayurvedic booster for digestion that improves digestion, cleanses the bowels, improves metabolism, and boosts the energy of the person. It is an Ayurvedic medicine for sugar. As it is rich in antioxidants it helps to reduce the oxidative stress of the body. It is also used in Ayurveda as a part of regimes to treat or maintain skin and hair.

The benefits of Amla have been described above. Haritaki means that which removes diseases and makes the body shine. It has been given the title of King of Herbs in Ayurvedic and Siddha medicine. Haritaki is used in Ayurveda as a natural hypolipidemic, anti-viral, anti-fungal, antimicrobial,  hepatoprotective, cardioprotective, anti-bacterial, antioxidant, immunomodulator, anti-diabetes, hypolipidemic, and wound healing ingredient. With so many benefits it is no wonder that this fruit is so highly revered and widely used. It supports good digestion and balances all the three Doshas and primarily the Vata Dosha. It is an important herb in Ayurveda for diabetes. It is used in the Ayurvedic treatment of piles and haemorrhoids. Its use should be avoided during pregnancy.

Another natural ingredient that falls under the Ayurvedic medicine for diabetes control is cinnamon. Yes, it may be a wonderful topping for a delicious dessert dish, but cinnamon on its own is known to help decrease blood pressure and fight diabetes, as well.

Cinnamon is also known to be an effective stomach cleaner; it reduces and sharp spikes in blood sugar after meals, and increases your insulin sensitivity as well. Cinnamon has been attributed to the ability to be used as an ayurvedic herb that is a cardio tonic that helps hypertensive patients and in diabetes treatment in Ayurveda. It is used in Ayurveda to reduce the vitiated Kapha and Vata Doshas while increasing the Pitta Dosha. It is also used in traditional medicine as a carminative, haemostatic, antiseptic, astringent, antispasmodic, and expectorant. It is found to be very useful in disorders caused by Ama or the metabolic waste defined by Ayurveda.

How can I get rid of diabetes permanently?

While there is no standard cure that eradicates diabetes from the root, you can still follow Ayurvedic medicine for high blood pressure and diabetes, along with a special Ayurvedic diet to take care of the main symptoms. An Ayurvedic lifestyle reduces the effect that diabetes has on your body and allows you to live a holistic and healthy life.

A holistic Ayurvedic routine includes waking up at six in the morning, scraping your tongue to get rid of any digestive waste (also known as ama), then you can take the Ayurvedic tablets for diabetes. Along with the medicines, you will have to drink bitter gourd juice because it contains active anti-diabetic properties.

Yoga is so much more than fancy stretches and controlled breathing exercises, it not only helps you relax your mind, but it also helps you live with diabetes. There are certain poses that come with regular yoga practice, and these poses are considered as the best Ayurvedic medicine for diabetes type 2 because they help improve blood and lymph circulation and lower blood pressure and sugar.

Here are some poses that are recommended for diabetics, so that they can improve their overall quality of life and also notice significant transformations in their body.