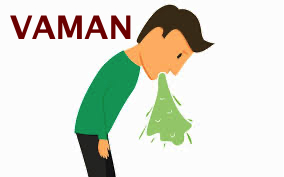 Vaman is one of the five therapies of panchakarma in Ayurveda. Vaman means therapeutic vomiting which is a medicated emesis. This treatment is done for the aggravated kapha dosha, which removes the toxins mainly from the respiratory and gastrointestinal tract. This therapy is done for preventive & curative purposes. Ayurveda believes that different seasons have a great influence in the aggravation of doshas, ex: Kapha in Hemant Rutu (Winter Season) and Vasant Rutu(spring season) respectivaly,  accumulation and aggravation Pitta in Varsha Rutu(Rainy Season) and Sharada (autumn Season) and Vata in Greeshma (summers) season. Hence one can adopt Vaman therapy in spring i.e. Vasant season as a preventive therapy in order to prevent disorders related to kapha.

Vamana treatment is targeted to expel increased Kapha Dosha out of the body. When Kapha dosha increases, it causes certain types of diseases – such as cold, cough etc. If the extent of Kapha increase is less, then some oral medicines can be given to suppress it. But if it has increased to a large extent and if it has moved from its natural place to other places, then it needs to be expelled out of the body. By expelling it out, the disease gets cured, often completely. Since Kapha is situated in the chest region, expelling it from the oral route is very easy. Hence, Vamana treatment is designed. To expel it out, first the Kapha Dosha needs to be forcefully brought from the extremities and different organs into the stomach, and then vomiting is induce

Vamana is a procedure in which Doshas (waste products or toxins) are eliminated through upper channels i.e. mouth. Specially the Kapha and Pitta Dosha brought to Amashaya (stomach and duodenum) from all over the body by the specific preoperative procedures and then eliminated out by inducing the emesis.

Kapha disorders and associated Pitta disorders or diseases originating or settled in the place of Kapha will be relieved either permanently or for a longer period of time.

It helps to prevent the forth coming diseases due to Kapha and Pitta.

In Ayurvedic texts, Vamana procedure is indicated for the expulsion of Kapha Dosha. Kapha Dosha is aggravated in Vasant Rutu; hence, Vamana is indicated in spring season approximately in the month of March and April.

Almost everybody can undergo Vasantik Vamana except those suffering from the diseases contraindicated for Vamana like bleeding from the upper channels like mouth, upper GIT, bronchial tree, emaciated, very old, pregnant woman, persons with hypertension and heart diseases, exclusively Vata constitution and Vata disorders.

Vamana protocol: It can be divided into three steps

Pachana and Deepana (digestives and appetizers)

Shuddha Ghrita/Siddha Ghrita or Tail (plain/medicated ghee/oil) was given in increasing dose for three to seven days as per the requirement till achieving the signs and symptoms of proper Snehana.

Diet during the days of Snehapana

Patients were advised to take moderate quantity of liquid and warm food, easy to digest mixed with little fat, which is neither sticky nor complex and to drink lukewarm water.

Diet on previous day of Vamana

Patients were advised to have plenty of milk, curd, sweets like sesame and Jaggary Laddu, Jalebi, Khicadi made from black gram, sesame, jaggary and rice or Dahi Wada.

(i) Patients were informed about different steps involved in this procedure.

(iii) Patients were advised to relax and remove the negative thoughts.

(I)Administration of Vamana yoga: This was done in the following way.

Patients were asked to sit on a comfortable Vamana chair of the height of knee joint.

Pulse and blood pressure were recorded before, during and after completion of Vamana Karma.

Administration of food articles and drugs:

Vamana was induced in the early morning between 6 am and 9 am.

During the procedure, Vamanopaga Kashaya (supportive decoction to continue vomiting) like decoction/hot infusion of Yashtimadhu (glycyrriza glabra) after each Vega was administered repeatedly to support the act of vomiting till the appearance of Pitta (bile) in vomitus.

(II) Observations during Vamana Karma: Record of input, output and other observations were maintained.

(III) Assessment of Vamana: It was assessed as Pravara (highest), Madhyama (moderate) and Hina (lowest) Shuddhi (cleansing) on the basis of four criteria as per the classical texts.

Vegiki criteria: It is on the basis of number of bouts like 4, 6 and 8 Vega (projectile vomiting bouts) for Hina, Madhyama and Pravara Shuddhi respectively. In addition to projectile bouts, smaller bouts in every aspect than Vega (Upavega) were also recorded.

Maniki criteria: It is on the basis of the quantity of elimination of Dosha, like 1, 1½ and 2 Prastha for Hina, Madhyama, Pravara Shuddhi, respectively.

Antiki criteria: It is on the basis of endpoint; it is advised to continue Vamana till the appearance of Pitta in the vomitus which marks the end of Vamana.

Laingiki criteria: It is on the basis of positive signs and symptoms produced after Vamana.

When Vamana Karma was completed, patients were kept on close observation and on special dietetic and behavioral restrictions which are considered as “Pashchata Karma” for some days till achieving Agnideepti and Bala. This may be classified as follows.

After Samyaka Vamana, patients are advised to inhale the medicated smoke, gargle and wash mouth, hands and feet, then to rest for about an hour.

It has to be planned on the basis of type of purification achieved by Vamana i.e. for Hina, Madhyama and Pravara Shuddhi, three, five and seven days respectively. Generally, in all the patients after Vamana Karma, the Peyadi Samsarjana Krama is advised as dietary regimen as follows with little modification: