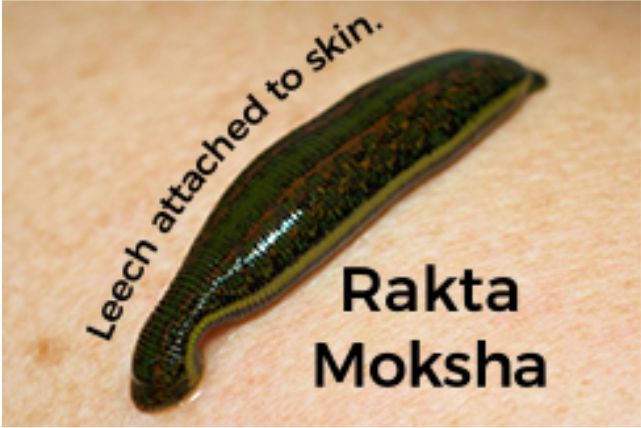 Acharya Sushruta, ‘the father of surgery’ explained Raktamokshana (Blood-letting) as one of the five Panchakarma procedures. It is derived from the two words, ‘Rakta’ means blood and ‘Mokshana’ is letting, is used for removing or displacement of impure blood from the diseased area /body. Raktamokshan therapy is the blood cleansing and purification therapy.

According to Ayurveda there are seven Dhatus (bodily tissues) in our body and Rakta is the second of them. Rakta in its healthy state improves one’s complexion and nourishes the muscle other tissues. It also has Jeevana (life) as its important function. When this Rakta is vitiated, it results in several diseases.

Factors that vitiate or cause toxins in blood are:

Consumption of alcohol, excessive intake of salt, sour, pungent, unctuous and heavy food items, consuming stale food, over eating, sleeping immediately after food, exposure to too much of heat/ sun and stress. Apart from these, Rakta is also vitiated naturally in the Sharad (autumn) ritu.

Complications to be treated with Raktamokshana Therapy….

Raktamokshana is one such treatment in which the vitiated blood is let out of the body and this helps to cure the disease.

Based on various factors, the following methods are used for Bloodletting.

Anushastra Visravana: is the first type and includes three methods – In case of blood being vitiated by Vata dosha – Shrunga (horn) is used for bloodletting, In case of Pitta dosha – Jalauka (leeches) and in Kapha dosha – Alabu (gourd) are used.

Shrungavacharana (Cow’s horn): The horn or Shringa of a cow is used in vata dosha vitiation as the property of cow’s horn is described in the classics as hot, sweet and unctuous. These qualities are opposite to the quality of Vata. Shringa when applied for raktamokshana can bring out blood from an area of ten angulas (1 angula is equal to widest part of the thumb).

Leech (Jalaukavacharana): The very basis of life for ‘Leech’ is water, since their site of dwelling is Jal or water, ‘Leech’ is known as ‘Jaloka’. Jalauka are used in pitta dosha as their properties are opposite to pitta such – being cool, sweet and unctuous. Jalauka can suck blood from an area of one hasta (palm). Broadly Jalokas’ are of two types. Six different types of Leeches are used in these two types :-

Alabu (Pitcher gourd): Alabu is pungent, rough and sharp and thus used useful in kapha dosha vitiation. With the help of alabu bloodletting can be done from an area of twelve anguli (1 finger breadth).

Shastra Visravana: is the second, which includes two methods when there is vitiation by two or all three doshas – Siravyadha (vein puncture) or Pracchana (scarification) are to be adopted for letting out the blood. While Pracchana is used for letting out blood from an area of one anguli through several incisions, Siravyadha (venous/vein puncture) can purify the entire body.

These different methods are useful not only according to dosha predominance but also as per the area and site of vitiation. In deep seated pathology, Jalauka (leech application) is preferred; in case of generalized vitiation of rakta – Siravyadha is advised and Shringa (horn), Alabu -if pathology is superficial. Among various modalities of raktamokshana, jaloukavacharana (leech therapy) and siravyadha (venous puncture) are more in practice due to its simplicity and ease of access.

Raktamoksha is contraindicated in cases of pandu (anemia), kamala (jaundice), rajayakshma (Tuberculosis), general debility as a result of any disease, and prameha (diabetes). It is also contraindicated for children (below 10 years) and the elderly (above 70 years of age). It is not indicated in pregnancies, breast feeding mothers and in blood loss such as in menstruation, in accidents, etc., ascites, anemia, hemorrhoids and dropsy.

Although Raktamokshana is the most limited of the five major procedures, it provides rapid and sometimes dramatic reduction of symptoms in certain acute disorders, especially where time is a critical factor. In situations, when Pitta symptoms must be reduced quickly such as in gouty arthritis, alopecia, some of the skin diseases, acne, etc. and also when there is no time for Purvakarma (preparation for Panchakarma) and Panchakarma procedures, acute symptoms can be relived within hours by simply removing a small amount of toxic blood from the affected area using the above methods. After that the patient can be put on any Panchakarma regimen.

Raktamokshana as part of a Panchakarma procedure is a special and powerful procedure requiring guidance from a properly trained medical staff. It is performed individually for each person with his or her constitution and medical condition in mind. It would require close observation at every interval and thus patients are advised to approach a well-qualified doctor.