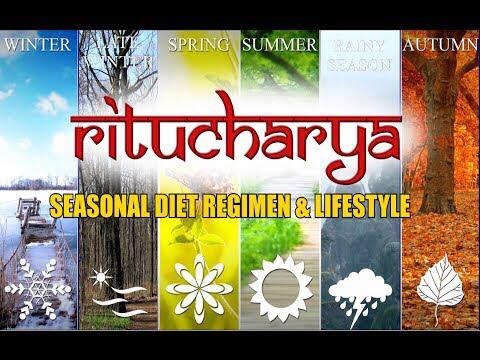 How is it to have a sip of cold drink when you are in sweaters and mittens? It’s intolerable for sure. And what about having a spoonful of hot soup when the sun is at its zenith? Too unpleasant, right? Each season has a different role to play and it brings a change in and outside our body. In Ayurvedic language, the year is fractioned into six seasons or ‘Ritus’, each having diverse effects on our body as well as the environment, and hence our body needs to cope up with these effects. And if we don’t do so, we will get subjected to lifestyle disorders. To evade the imbalance of the three doshas, Ayurveda bids a seasonal diet and routine called ‘Ritucharya’, where ‘Ritu’ stands for ‘seasons’ and ‘Charya’ for ‘regimen’. There are six ritus in accordance to Ayurveda:

Vasant: This is the time when we meet the best part of the year, flowers blooming and leaves at their greenest. Focus on easily digestible food, precisely cereals, barley, white and rice. Foods which are bitter, astringent and pungent are advisable. Crumbs which are difficult to digest and afternoon naps should be prevented.

Varsha: Varsha ritu is very much prone to lifestyle disorders. So, we shall be preventive rather than curing. Sour and salty food are suggested during this time. Annexing a little amount of honey to water would abet digestion. Oil massages and regular baths should be encouraged. Indulging in day time sleeping should be prevented.

Sharad: Ingest sweet, bitter and light foods. Wheat, barley, cabbage and milk are the most effective during this season. Avoiding excessive eating, keep in mind to eat only when you’re hungry. Take in, water exposed to sunlight for the whole day and moonlight for the night.

Hemant: Bathing in warm water, circumventing Vata aggravating foods such as cold and dry foods. Stay away from cold drinks during this season. Practice body exercise and oil massage regularly.

Sarvah Ayurveda concentrates on worthwhile Ayurvedic treatments and ancient holistic policies which will shield your body by helping it to handle different seasons and its various impacts.